Sustainability isn't a hot topic on our family farm, it is a way of life. Recently, our way of life was certified by Maryland inspectors as being a "Certified Agricultural Conservation Steward" under the Farm Stewardship Certification and Assessment Program. (FSCAP). The program is sponsored by the Maryland Association of Soil Conservation Districts, and farmers must meet the ACSCS standards in order to gain the status of "Certified Steward". 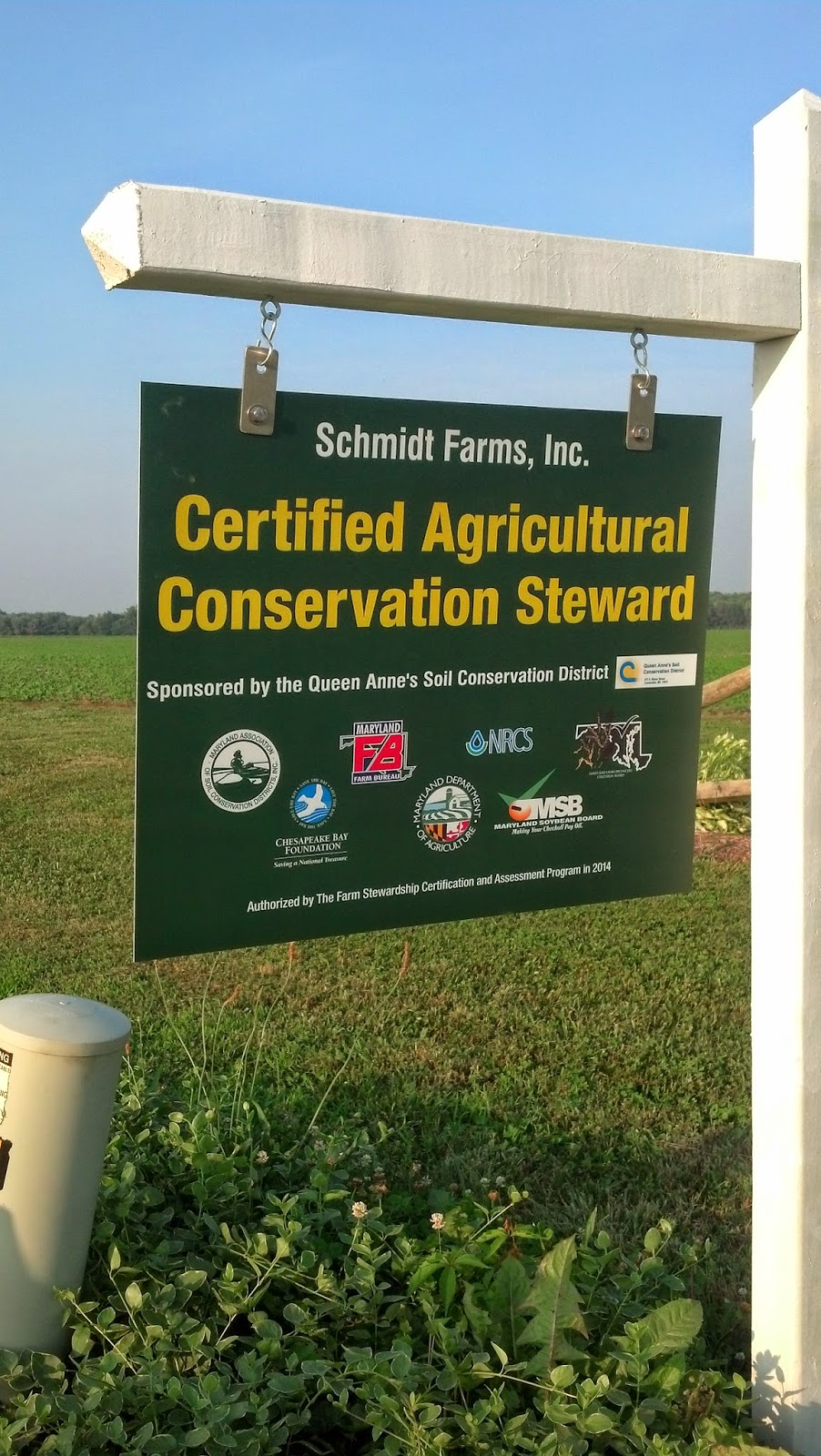 Under the FSCAP program, we voluntarily submit to inspections of both recordkeeping and have all our fields inspected to ensure that not only have we documented the conservation we have put on the ground, but that we maintain and preserve those practices to ensure that excess nutrients and sediment do not leave our farm.

Going through our mandatory nutrient management plan, the inspectors look for soil, manure, and plant tissue analysis and that what we apply to our plants and soils is what is required by the crop. They look at our approved soil conservation and water quality plan to make sure that all the conservation recommendations were implemented as directed. They make sure our fertilizer receipts match our application records. They make sure we correctly complete and submit to the Maryland Dept of Agriculture the mandatory Annual Implementation Report (AIR) for all fertilizer use.

Once the records pass inspection, they walk the fields, inspecting the conservation on the ground. These are practices that provide natural resource protection such as buffers around bodies of water seen below. 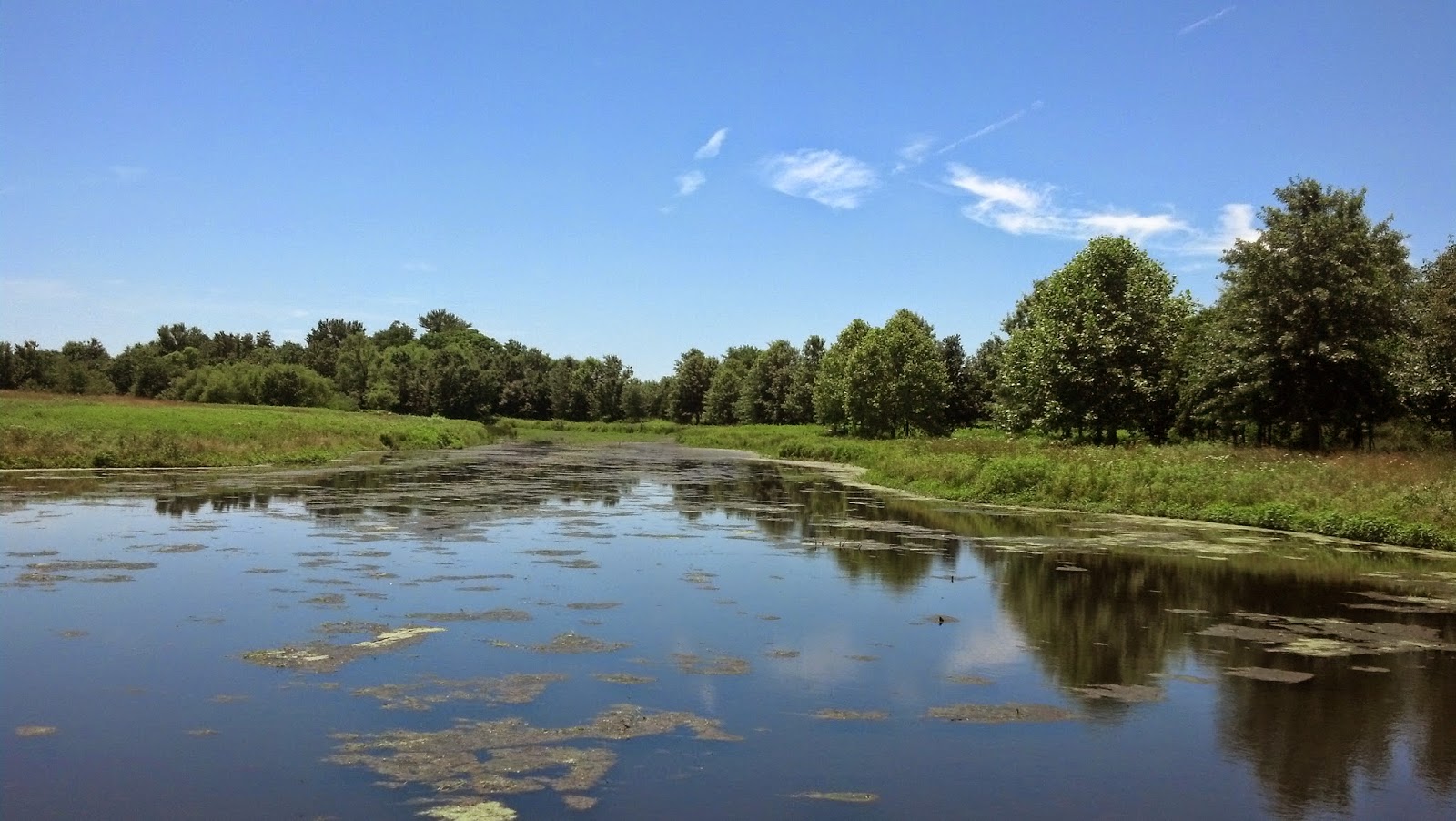 We're required to have a 30 foot buffer but ours is more like 1000 feet from this stream. On the right, you see trees that were planted as part of the Conservation Reserve Enhancement Program (CREP). This program is a voluntary land retirement program that removes production agriculture from sensitive land such as this one adjacent to the stream. The practice of setting aside land that is sensitive is a very sustainable approach that actually benefits the larger downstream community more directly than it benefits us. In total, we have taken 120 acres of land out of agricultural production over the last 15 years, in addition to the implementation of many other active conservation practices. 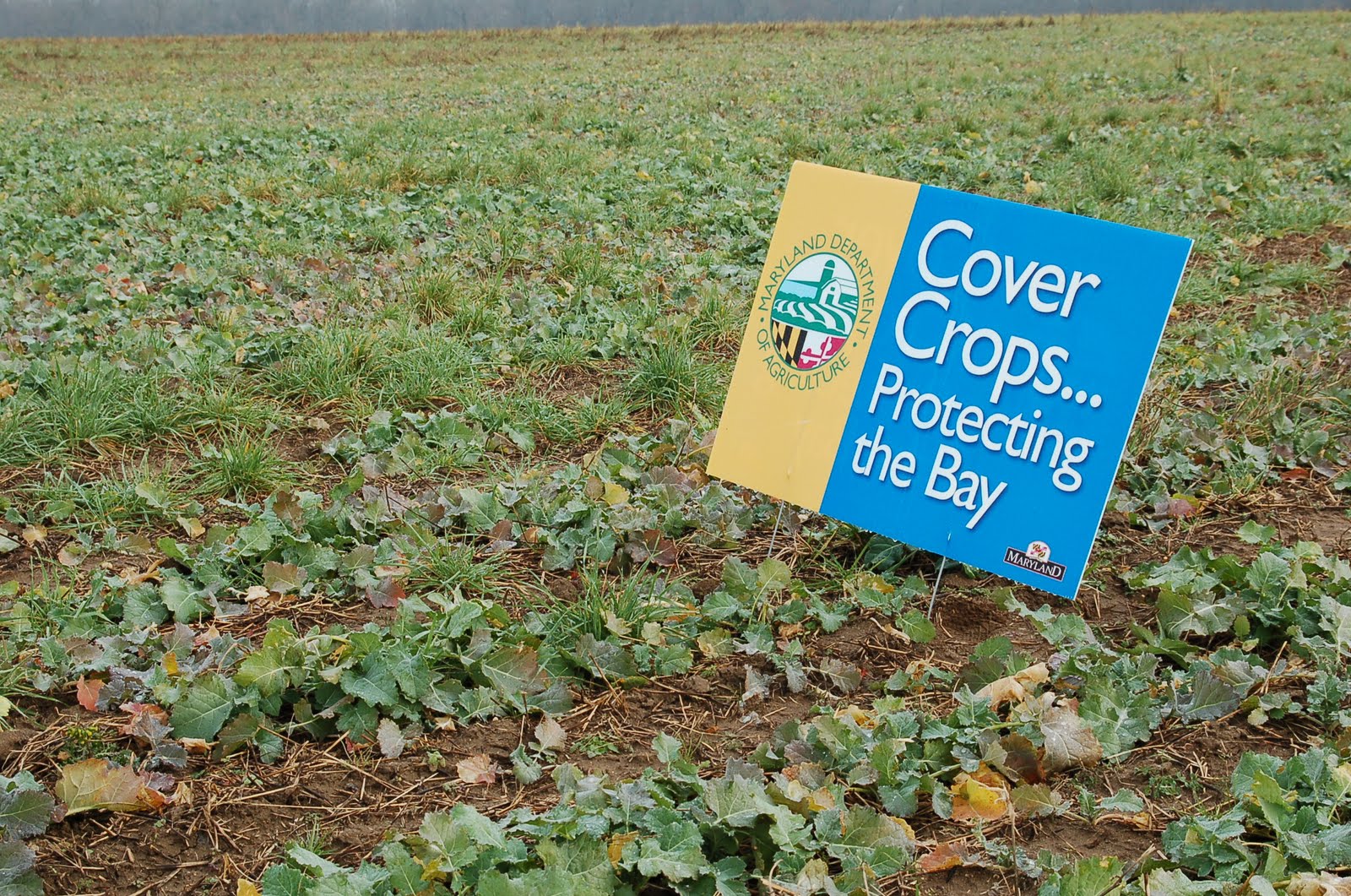 Cover crops is also another conservation practice we put into place on as many acres as we can every fall. These crops take up any remaining nutrients in the soil left over from the crop we just harvested, and then slowly release those nutrients in the spring as the crop decomposes in the field acting as a sort of green manure. This practice adds to the sustainability of our soils by enhancing the qualities, improving the nutrients and organic matter and overall soil health which is critical to the sustainability of the farm for future generations. 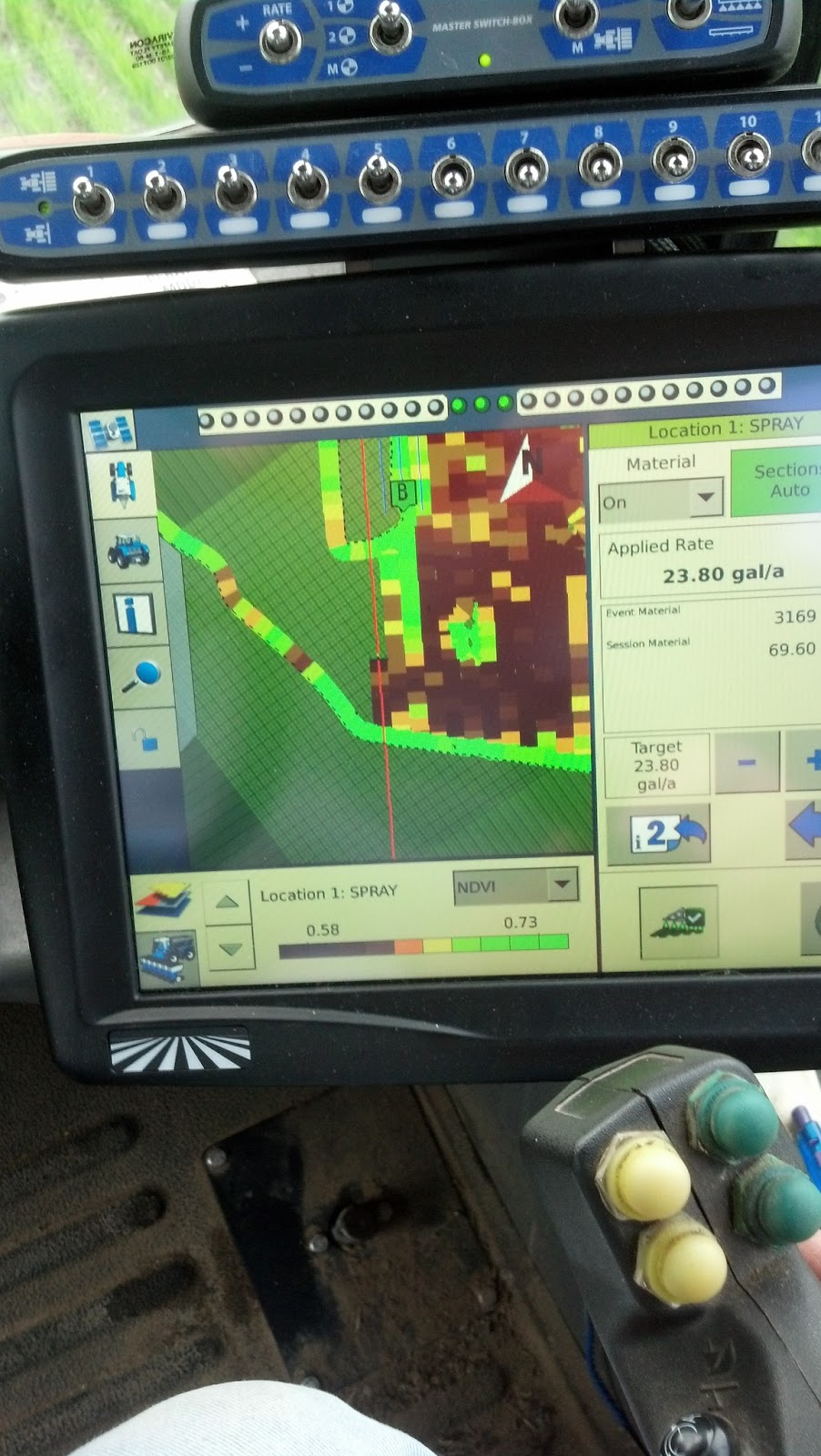 Precision ag is another sustainable practice that we have employed on our family farm. Using the newest technology allows us to use less fertilizer by reading the chlorophyll content of the plant and the computerized technology in the tractor adjusting the rate of the fertilizer based on the specific crop. This saves us both economic resources and provides an environmental benefit to the larger watershed community around us. 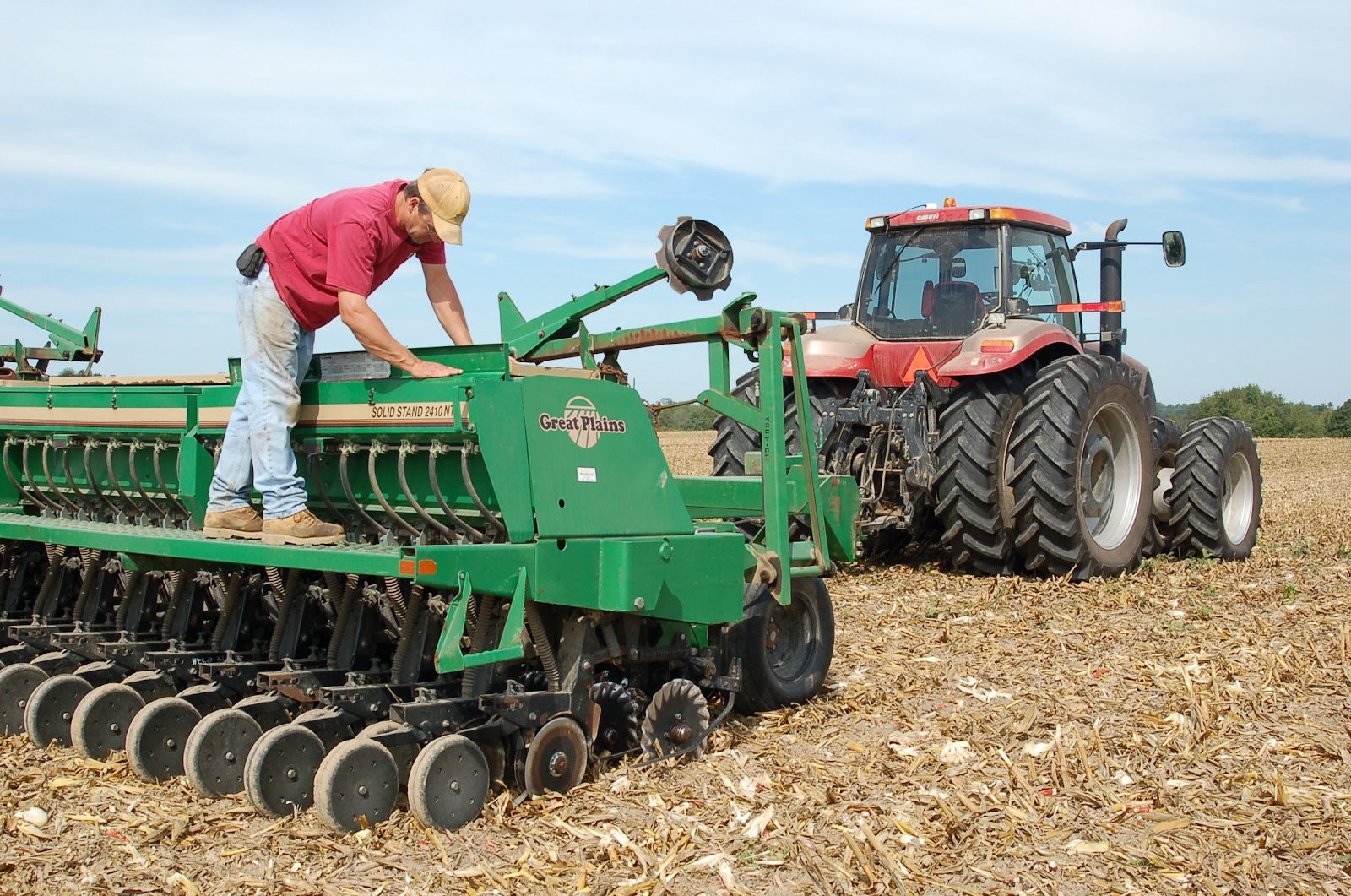 Conservation tillage is a big part of our sustainable agricultural practices. We use both no-till and conservation tillage. Above you see Hans getting ready to no-till which means he is seeding a new crop directly into the residue of the previous crop (note the brown corn stalks on top of the soil). No till means we do not plow and therefore do not turn over the soil, exposing it to erosion, sediment and phosphorus loss. Our top soil and its health is our livelihood. We do all that we can to preserve and protect it.

All human activity has an impact on the environment, agriculture included. Sustainable agriculture is about being responsible to preserve and protect the resources that we have that provide food and fiber for our neighbors, while protecting the soil, water and environment for the now and the future. There is nothing at greater stake than the future sustainability of family farms like mine. Certification in agricultural conservation is striving for the best for our land, the best for our surrounding and downstream communities, and most importantly, the best stewardship for the next generation to operate this family farm.

Posted by The Foodie Farmer at 2:04 PM No comments:

I AM a Corporate Farm!

For years now I've been using this family pic during my farming presentations saying "We are a corporate farm and here's our Board of Directors." I was actually being facetious because our farm is a family farm, large yes, but still, what you see below is pretty much what you get (plus a few years). Little did I know that today, I'd discover it wasn't tongue in cheek, it was actually true! We are a "corporate" farm! 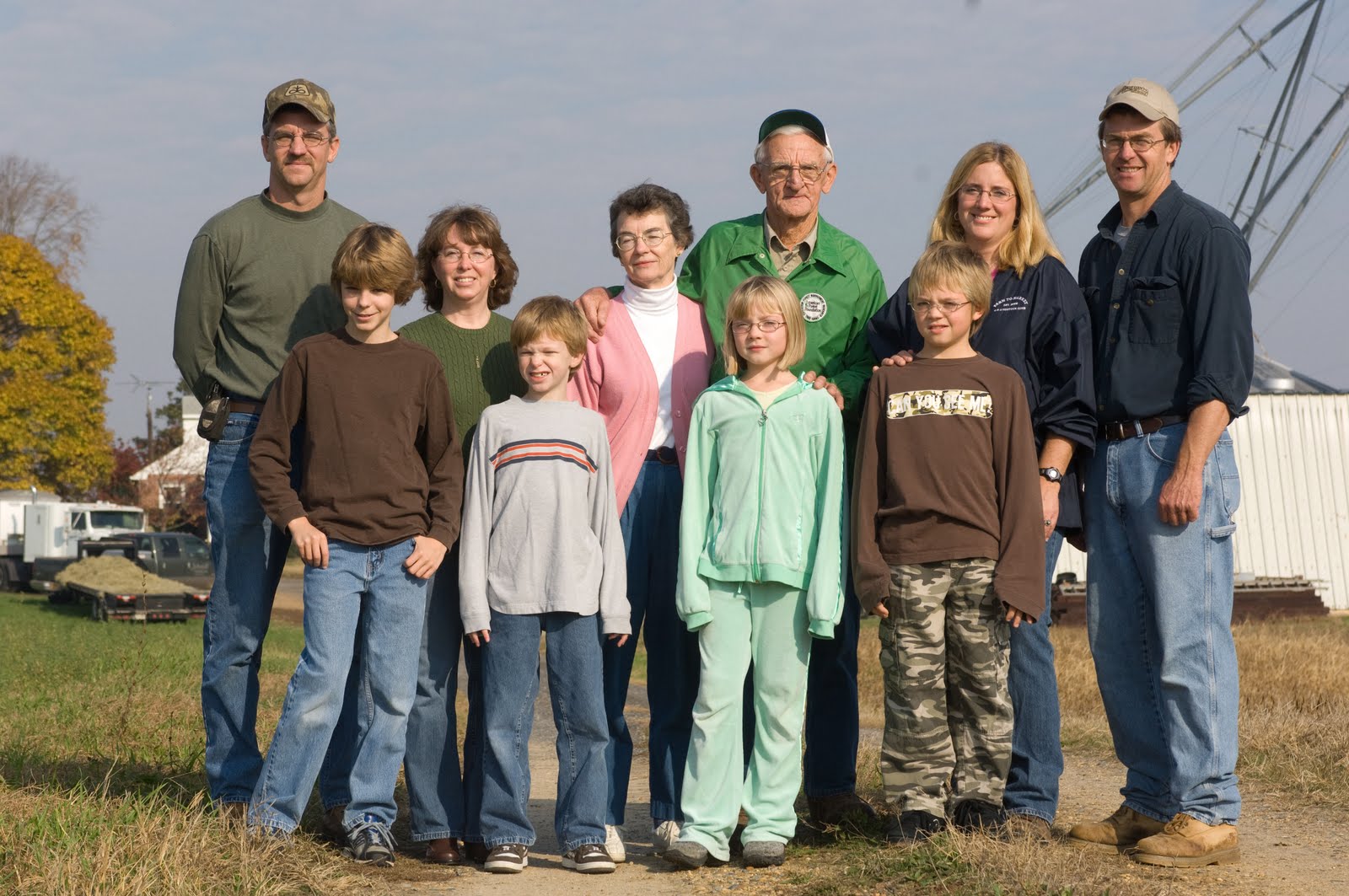 This pic was taken in the fall of 2007, as one of the Maryland farm families who were inducted into Maryland's Agriculture Hall of Fame.  So the kids now are all either in high school or have graduated. But this is it, the family who operates the family farm... and it happens to be a corporate farm.

I was researching USDA 2012 Ag Census data for an upcoming webinar I am speaking at on U.S. Agriculture 101. One of the questions I was asked to define was the difference between family farms and corporate farms. As I started looking at the statistics and asking questions of the folks at National Ag Statistics Survey (great guys, very helpful BTW), I was amazed at what I found out!


That's a total of 95% of U.S farming operations, owned and operated by families....

Source: 2012 U.S Ag Census Atlas Maps
The remaining 5% are those horrible "corporate" farms the media is always slamming.... right?
THOSE are the ones we want to do away with right?

Source: U.S. 2012 Ag Census, Table 67
In case that chart is too small, here is the link to the 2012 Ag Census, check it out on Table 67.
Of the 5% that are defined as "corporate",
(you know, those "Farmed and Dangerous" farms that Chipotle slams or those big "industrial" farms run by robots and cartoon scarecrows devoid of all ethical behavior, yeah those)
Corporate farms are defined by USDA as those that are "incorporated under state law".
So this would be an LLC, an S-Corp, or a C-Corp.
So Schmidt Farms Inc meets USDA's definition of a corporate farm when all along we thought we were a just a good old, family farm.

Or maybe there are more of us "good old family farms" than you're being led to believe.

What the census data tells us is:

But the small farmer is being squeezed out by "Big Ag" right?

The average U.S. farm is 434 acres, that the median between us big guys and the small guys. Except that USDA defines farms based on gross sales, not by size or numbers of acres. Suburbia and urbanization have resulted in pretty obvious loss of farmland when you look at this map. It looks like the small guy is getting the squeeze doesn't it? 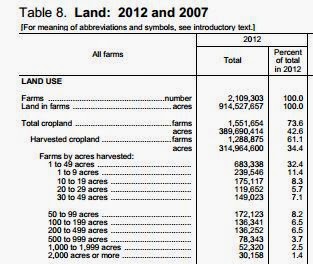 The majority of the acres are held by small farms, the largest segment being farms under 49 acres total.
Family farms like mine that are over 2000 acres represent only 1.4% of U.S. agriculture.

More than half of all U.S. Farmers 52.2% reported agriculture was NOT their primary income source:

But historically, small farms are difficult to cash flow.
Nearly 57% of all farms have gross sales of less than $10,000.
That's well below the poverty line so off farm income really isn't option to make ends meet.

So in summary:
1. The majority of ALL farms incorporated and unincorporated in the U.S. are family owned & operated. Non family, "Corporate" agriculture makes up less than 1/2 of 1%. Tax and liability structure tells you nothing about the values of that business and how it operates. Let's lose the word "corporate" as a label for the way we look at farms and how they operate.

2. The majority of U.S. farms are "small" and those farmers rely on other off farm income to earn a living. (I had a friend say they work to support their farming habit). Support your local farmers who do direct sales to consumers and farms like mine who sell wholesale to distributors which you buy at the grocery store.

Next time you hear in the media that "big ag" is putting small farms out of business, think again.

Next time you hear the media say that "corporate" farms are taking over family farms, think again.

In fact, I'm beginning to wonder why we don't think more for ourselves and pay way less attention to media and its false marketing messages.... we might learn something if we #FactCheck what we hear.