No More Food Fights! Can Farmers & Foodies Get Along?

It may be coincidence that both National Ag Day and National Nutrition Month occur both over the month of March but its not a coincidence that the issues of food and farming are so intertwined. The book "No More Food Fights!' is all about the conversation over food and farming, which is very polarized these days. Consumers don't feel farmers are paying attention to their needs or are suspicious of farming practices they are not familiar with. Farmers feel consumers don't understand agriculture and succumb too easily to media stories that don't paint an accurate picture.. Dietitians want to have science-based answers for consumers on how their food is produced. People in general are connecting back to the land now more than ever, or are connecting for the first time if their family lineage was always urban dwelling.

"No More Food Fights!" was published  by Michele Payn-Knoper, CSP and Principal of Cause Matters. After I read the book, I knew I wanted to share it with my dietetic peers (the RD part of who I am) who could benefit from the variety of perspectives offered in this book.  I did an interview with Michele and wrote a guest blog for Stone Soup of Food and Nutrition Magazine.

Here is the link to my interview with Michele and book review at Food and Nutrition Magazine:
No More Food Fights!

I think for me as a farmer, one of my favorite quotes from the book is by Chef Renee Kelly,
"People are fascinated by farms but far removed with where their food comes from. They can't identify with farmers because food is so readily available that customers just assume it's easy to farm." Can I get an Amen from the farm side? I find this to be so true both in person and in social media. A lot of folks talking about farming as "experts" without ever having driven a tractor, milked a cow, weaned a pig, or spread manure (at least not literally anyways).

We all like to think we are experts with very little else to go on. When I was a grad student, I had college freshmen consider themselves "experts" after taking Nutrition 101. I've heard dietary cooks call themselves dietitians because they have been preparing food for so long. Likewise, I've been told "I have a large garden so I am familiar with farming." The one that always makes me laugh is "I know all about farming because as a kid, I spent summers on my Grandparents farm." REALLY? And four decades later, that makes them an expert on how to successfully sustain a family farm in today's environment?

The quote from To Kill a Mockingbird comes to mind - "You never really understand a person until you consider things from his point of view... Until you climb inside of his skin and walk around in it."

Or this somewhat well-known and similar saying : Don't judge a man until you have walked a mile in his boots, Don't criticize another person's work until you've tried to do it yourself; don't judge another person's life until you've been forced to live it. (Random House Dictionary of Popular Proverbs and Sayings, 1996) I would add, "don't assume farming is easy because food is abundant."

So for me, this book echoes my heart both as an RD and as a farmer. I hope you will pick it up and read it, and apply it throughout your conversations about food and farming.
Posted by The Foodie Farmer at 12:29 PM 2 comments:

"Oh Be Careful Little Eyes What You See.."

Anyone else remember the lyrics to the title I gave this blog? It is a song I learned in Sunday School a long time ago, but is apropos to today's blog- deceptive or misleading images of food and agriculture found on social media.  I have been totally amused looking at internet images these days, some on Facebook but mostly on Twitter. It amazing the kind of response people give to images without considering if they are truthful or accurate. And there are 3 camps - folks who just think this is amusing,  folks who honestly believe the fake images they see, and skeptics posting fake images to push an agenda. Here are some of my recent favorites: 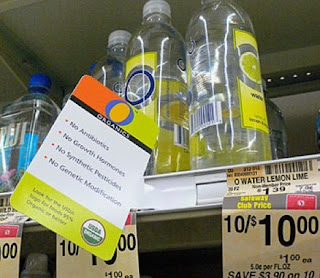 So what's wrong with this picture? See the USDA Organic seal in the lower right corner? Water cannot legally be labeled organic. The USDA National Organic Program (NOP) does not allow water to be certified as organic so the use of the label in this picture is a fraud. If you think about it, things that are literally defined as "organic" must contain carbon. Water has 2 hydrogen and 1 oxygen molecule, ... no carbon! If you see water labeled as organic in a store, it is false advertising. If you see it on the internet, its probably a fake. 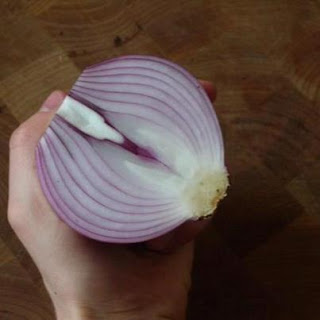 What could possibly be wrong with this picture? It's not the picture, its the content of the article that goes with it...It advises that placing cut onions in bowls around the house will result in the onion absorbing viruses and no one will get the flu.The claim is that onions are a magnet for viruses. Then the article accuses onions as being a huge culprit toward food poisoning.  It continues on to say that day old cut onions are poisonous and should not be consumed. Assuming you practice good, general food safety in your kitchen, there is nothing unsafe about using day-old or previously cut onions. 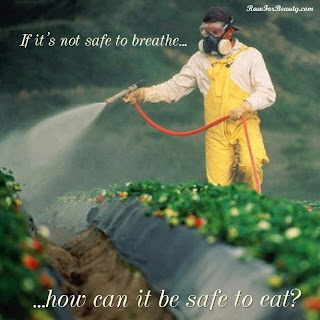 So what's wrong with this picture, I mean if he has to wear a mask, it can't be good right? The problem with this picture is that we have NO idea what it is he is spraying. He could be spraying copper sulfate which is an approved organic fungicide used to treat downy mildew and leaf spot in strawberries AND which requires the use of the respirator.  The copper sulfate label does instruct the applicator on what personal protective equipment (PPE) they must wear regardless of whether the pesticide is organic or synthetic. This label requires the applicator to wear a respirator. Labels are the law. The applicator does not want to breathe this stuff in, even if it is OMRI approved. The risk to the consumer eating the strawberries is negligible as growers follow strict harvest rules. If this is copper sulfate, then harvest can take place after 24 hours. Let's be clear, organic is not pesticide free. There are over 2,500 pesticides approved for use in organic agriculture. Organic pesticides are also toxic, which is why they are pesticides to begin with! Its the dose that makes the poison, not whether something is organic or synthetic.  Regardless of what type of pesticide he is using, he is protecting himself as he should. Bottom line is, we have NO idea what it is he is spraying but we assume the worst of course. When I first saw this image on twitter, it had "#pesticides #gmo" with it. That would lead you to believe that the strawberries are GMO right? Wrong! There are no genetically modified strawberries on the market so again, we're lead to believe something that is entirely unfounded. 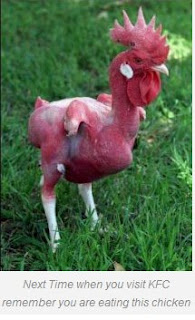 This is a good one! Why did Kentucky Fried Chicken change their name to KFC? Here is the internet answer! "KFC does not use real chickens. They actually use genetically manipulated organisms. These so called "chickens" are kept alive by tubes inserted into their bodies to pump blood and nutrients throughout their structure. They have no beaks, no feathers, and no feet. Their bone structure is dramatically shrunk to get more meat out of them. This is great for KFC because they do not have to pay so much for their production costs. There is no more plucking of the feathers or the removal of the beaks and feet." Seriously? Wow, someone has too much time on their hands to come up with that explanation! For the record, there are no genetically engineered chickens in our food supply.

On a different website, I found this claim: "“Chicken are GENETICALLY MODIFIED with hormones, carcinogens, GMOs, corn pills, arsenic and drugs so they become LARGER FASTER and as a result they often CRIPPLE under their own weights." Chickens do not become "genetically modified" by eating anything. Genetic modification is a scientific process requiring transfer of specific genes from DNA. It does not happen by eating.  Furthermore, it is illegal to use hormones in poultry production. I'm not even sure what a "corn pill' is. Arsenic has been used in chicken feed as it is an effective treatment for coccidiosis, an intestinal parasitic disease the infects the gut of chickens.  According to the FDA, organic arsenic, the type used in chicken feed is not a carcinogen. The bottomline is, none of this statement is entirely accurate and is very misleading and yet it is shared on social media as "truth" to promote an agenda. 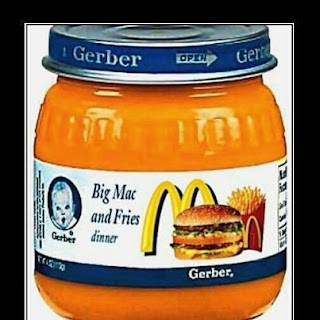 This image would make you think that A) McDonald's is now serving baby food, or B) Gerber is now producing McDonald's flavored baby food. Can anyone say photoshop?

Often times, these images are shared on social media as a joke, a way to get a good laugh out of something ridiculous or silly. But often, I see the messenger promoting these images as "truth", with people or groups tagging and sharing these images who have an agenda to promote.  So when you are looking and sharing pictures on the internet, pause a few minutes and think about what the image is portraying and what, if any, FACTS you know about the image. Apply some common sense. Do a bit of research. See if you can find the original source of the image or story and what kind of validity they may or may not have.

Perpetuating falsehoods does nobody any favors. Making assumptions about stories or images is nothing more than gossip. Harmless fun is one thing. A misleading campaign is another. So be careful little eyes what you see and then share on social media.
Posted by The Foodie Farmer at 5:36 AM 6 comments:

I was asked to write an article for the Academy of Nutrition and Dietetic's Food and Nutrition Magazine on soil health and its relationship to food. For me as a dietitian turned farmer, its interesting how much cross over there is between human nutrition and soil and plant nutrition. Looking a soil and plant tissue analyses is very much like reviewing  a patient's bloodwork. Its a snapshot of health and nutritional status. So while I am no longer prescribing diets for people, I do practice nutrition by prescribing diets for the crops we grow.

Click the link below to go to the online article:

There are also 2 really good videos from USDA's Natural Resource Conservation Service that I've linked below.  One covers all the basics about soil and its health. The other is a good video on farmers adopting cover crops. They are both about 30 minutes long but worth the watching if you want to learn more!

Posted by The Foodie Farmer at 7:41 AM No comments: