I'm so proud of our guys! Harvest time on any farm is a very busy season. Because of our diversification, we harvest 7 months a year, beginning in May, and ending, hopefully, in November. Soybeans are always the last crop to be harvested and it requires a lot of management on our part because we grow food/tofu grade soybeans, seed-grade soybeans, and feed-grade soybeans. (See my December 17, 2011 blog called "The Many Faces of Soy"). Equipment needs to be diligently cleaned between varieties and tracking which beans go into which bins and to which elevator. Its a bit of a juggle and something we try to get accomplished with minimal interruption.

As with any farmer, we are anxious to be finished with harvest as soon as possible. We no longer have to worry about weather and the hand that Mother Nature deals us once everything is "in the bin". That's why I'm so proud of our guys who interrupted harvest on Friday, November 23, 2012.

No, we did not go Black Friday shopping!

My husband, brother-in-law, myself, my son, daughter and nephew all joined together with others from our church and headed out on a mission trip 2 hours south to Deal Island, Maryland which was hit by Hurricane Sandy, but only recently (finally) declared a disaster area by the federal government.

Friday was a gorgeous day. A PERFECT day for soybean harvest... and our combines stood still. Unheard of! We knew that the needs of these folks in Somerset County were falling through the cracks and want to contribute to the relief effort. Their needs took priority over our harvest. We're so happy we could help.

There is a lot of need up and down the Eastern Seaboard. If you would like to contribute, you can donate $10 by texting "RESPONSE" to 80888 and reply "yes" to the text you receive from the United Methodist Committee on Relief. While there are many wonderful relief organizations, 100% of your donation to UMCOR goes to disaster relief and not administrative overhead. For more information or to make a larger donation,  visit The United Methodist Committee on Relief

Brine It, Grill It. The BEST Turkey Recipe!

I have a tradition which is to cook my Thanksgiving turkey in a pretty non-traditional way. I charcoal grill it. I discovered this recipe 6 years ago while reading an issue of Yankee Magazine. The recipe was provided by Chef Geoff Gardner of Sel de la Terre Restaurant in Boston which has been named one of the top 100 new restaurants in the world by Conde Nast Traveler magazine. On a whim, I decided to try this recipe and it has changed my whole Thanksgiving turkey perspective! I LOVE the flavor this brine gives to the turkey and the moistness of the meat. Combined with the smokey grilled flavor, this is by far the best turkey recipe!  I have tried this recipe with both store-bought and locally-raised turkey and it works well with either.

Marylander's have lots of options to purchase local turkey. I would encourage you to find a turkey farm near you that does direct to consumer sales and give them a try. Click here for the list of Maryland turkey farms:  Find a Maryland Turkey Farm If your not a Marylander, google your state's department of agriculture which should have a listing of turkeys and other products that farmers in your area sell directly to consumers. Try to support your local farmers whenever possible!


1 orange sliced in half


1 apple sliced in half

In large stockpot, combine 2 gallons water, salt, sugar, dried thyme & rosemary, peppercorns, and garlic. Bring to a simmer and stir to dissolve salt; remove from heat. Fill sink with ice water, then lower pot into sink to cook brine. When brine is cooled, submerge turkey in brine. Cover and refrigerate for 24 hours.


Heat grill to medium (about 375-400 F). If using charcoal, build fire on one side of grill. Remove turkey from brine and discard brine. Rinse and pat turkey dry, place bay leaves inside cavity, rub skin with sliced orange and apple, then place in cavity. Place turkey breast side up in a large disposable aluminum baking pan and place on grill. (Blogger note: I also place the turkey in a cooking bag which I think helps keep the flavors and juices inside).  If using charcoal, place pan on opposite side of fire for full circulation of heat. Cover grill tightly. The grill does need to be placed out of direct wind or you will never be able to maintain the temperature of your grill. DO NOT place your grill in your garage or other enclosed space due to carbon monoxide poisoning!


Check turkey every 30 minutes and baste with any pan juices. Charcoal grills may need to have extra charcoal added to maintain heat. Be careful not to let grill flare up. Grill turkey about 2 hours or until meat thermometer inserted into thigh registers 170 F. Let turkey rest at least 30  minutes before carving.
Enjoy & have a blessed Thanksgiving!
Posted by The Foodie Farmer at 4:32 AM No comments:

The Saga of the Stolen Sheep

Let me start by saying, this story has a happy ending. Who would have thought that our first trip to the North American International Livestock Expo (NAILE) would take such a turn of events as a trailer full of stolen sheep.

So a little background. My daughter is in the 4H sheep project. She exhibits sheep every year at several fairs and works with a local sheep breeder where she gets her show sheep. 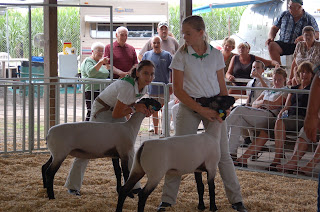 This year, in order to help expose her to the world of sheep showing outside of our region, we decided to attend this big livestock expo, not as exhibitors, but as shepherds. Our breeder, John Hall of Hall Club Lambs needed help getting his sheep ready for the sale at NAILE in Louisville, KY so my daughter and her best friend agreed to attend the expo and help John with the sale of his sheep.

Louisville is 700 miles and a 12 hour drive from our farm. Since I only had 2 - 12 year old girls with me, and not being the best long distance driver, we drove 4 hours the first night and stayed at a hotel then drove the rest of the way the next day. Our breeder did the same thing, except he has a camper in the back of his pickup so he camped overnight in a parking lot in Morgantown, WV, about 5 hours from his farm.

The next morning his truck didn't start so he called AAA for a tow to a repair shop. He had to unhitch the livestock trailer and leave it in the parking lot, which the business said was fine and something that contractors and other people did all the time. When he got back a little while later, his trailer with his sheep on board had been stolen. I can't imagine what went through his mind at the time. If it were me, I would have been sick to my stomach. He called me in Louisville to tell me what happened and I nearly was. How disgusting that someone would do such a thing.

Long story short, on thursday I started tweeting out the stolen trailer license plate (thanks to all who retweeted by the way) and John sent an email to the sheep breeders association. We were both pretty much convinced that the trailer and sheep were gone forever. I mean, how do you find such things in the hills of West Virginia?

Lo' and behold, he found the sheep on the trailer unharmed and in reasonably good condition! He got permission from the police to bring the trailer back to his farm so he could attend to the sheep. He fed and watered them and while they are all pregnant and due to lamb over the next few months, they all seemed to be in fairly good shape considering.

It amazes me that someone would actually steal a trailer of sheep. The side slats were open, so any intelligent thief would have looked in to see that it was sheep, not motorcycles, not ATVs, not tools or equipment. Apparently, they either got wind that they were being looked for (who knows, maybe they were on twitter too), and got cold feet, or they got the trailer somewhere, and THEN looked inside and discovered it was sheep, NOT motorcycles, ATVs or expensive equipment.

While we may never know why the thieves changed their mind, we are extremely grateful to the Hatton family of West Virginia for finding and tending the sheep until we could get John back to pick up his now repaired truck and the trailer full of sheep.

The sheep are now home and recuperating from this saga. 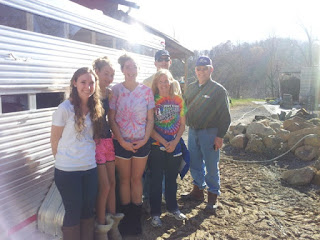 The Hatton family with breeder John Hall (on right) with recovered trailer & sheep.

Thank you Hatton family for finding and tending the stolen sheep! The support and community of farm families around this country is awesome!
Posted by The Foodie Farmer at 1:53 PM 1 comment:

The Meaning Of Harvest

As we continue work toward the end of our harvest for 2012, I was asked to guest blog for the Academy of Nutrition and Dietetics for their online Food & Nutrition Magazine. I was asked to reflect on what harvest means to me. The link below will lead you to my guest blog.

In this week post-Hurricane Sandy, I am even more grateful to be reaching the end of our harvest season in a few weeks. The picture below I took the day after Sandy blew over us. Our ground was so dry that most of the 10" of rain soaked right in.  The rainbow reminded me that there is the sign of the promise! 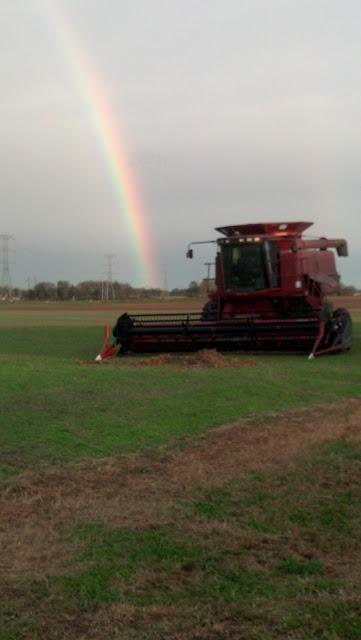 Posted by The Foodie Farmer at 2:15 PM No comments:

Women in Agriculture: Strength in Numbers

I've been blessed of late to be asked to guest write or blog for a several media outlets. Earlier this week, my article on women in agriculture entitled "In the Company of Many" discussed the rise of the role of women farmers. It was published in a special section of our local weekly agriculture paper called The Delmarva Farmer.

To the women farmers, both those I've met and those I have not, I am thankful to be in the company of so many wonderful female farmers!

Here is a link to my article about women in agriculture. Enjoy!

In the Company of Many